Whenever we see a spirit based around a superfood, we get a little skeptical. Sure, acai or pomegranate have terrific levels of antioxidants, but the real truth is, if you want to be healthy, don’t drink a lot of alcohol. We were relived to see that although Pama Pomegranate Liqueur draws its ingredient from a superfood, there’s no mention of that fact or any mention of antioxidants anywhere on the bottle, site, or in their promotional literature. As a flavor, pomegranate has become quite popular. This is due in part because of the perceived health benefits, but it’s also because of the nice balance between sweet and tart that a good pomegranate can have.

We review a lot of spirits at Drink Spirits and very few have inspired us to mix with it as much as Pama Pomegranate Liqueur. From our first sip of Pama straight up we began thinking of spirits and cocktails we could mix with it. Pama belongs to a very special class of spirits, including St. Germain (aka Bartender’s Ketchup), Domain de Canton, and Chambord, that are supremely mixable. These spirits are not only easy to mix with, they can stand in or be added to classic cocktails to instantly transform them into something new. Pama Pomegranate Liqueur is a natural companion to champagne: mixing it 1:1 with champagne makes an instant and delicious drink. Pama is also very compatible with gin so we used it as a stand-in for Creme de Mure in the classic cocktail The Bramble.  We were impressed with just how many drinks Pama shined in (although its tartness often required a slight adjustment to the amount of simple syrup we used). Perhaps the easiest application we found for Pama was simply mixing it with either lemonade or soda – both resulted in some of the easiest, universally delicious drinks we’ve had with a liqueur. Pama Pomegranate Liqueur is so mixable and balances sweet and tart so well, it may be one of the most useful liqueurs released in the past few years. While we still  have the same bottle of Chambord that we got a couple of years ago, we can see making our way through a bottle of Pama fairly quickly, and that’s saying a lot for a liqueur. 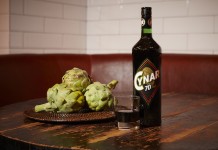