There was a time not long ago when you wouldn’t find even an article about bitters, let alone an entire book. But an interest in craft cocktails and unique bitters has soared, and Brad Thomas Parson’s book, Bitters: A Spirited History of A Classic Cure-All, tries to capture all this excitement and chronicle the current bitters buzz.

Parson’s Bitters book is a hodge podge of all things bitters. It combines a brief (possibly too brief) history of bitters with a compendium of bitters on the market, as well as how-to guides on making bitters and a collection of cocktail recipes. There are a lot of elements and not all of them come together seamlessly. Parsons’ book often takes left turns with special sections dropped in the middle of other sections. A piece called “A Word on Underberg” leaves a page on garnishes as an orphan, and a section on PDT feels shoehorned in the history of bitters.

It’s hard to figure out who this book is exactly targeted at. The kind of person who would be interested in investing the time and effort to make their own bitters wouldn’t need the fundamental cocktail basics that are presented in the book, while the cocktail novice will be completely overwhelmed by the complexity of some of the modern cocktail recipes. It would have been better for Parsons to pick an audience and stick with it, and that audience probably should be fellow cocktail enthusiasts and bartenders who are already making cocktails and looking to expand what they do.

Perhaps the biggest disappointment with the Bitters book is that it doesn’t really go deep enough into its topic. Instead of really looking into the history and progression of bitters, it dedicates a scant six pages to the topic, with much of the information reading like a digest of the stories which are commonly told about bitters. Parsons could have easily swapped out the final section of the book, dealing with bitters in the kitchen, for actual interviews with some key bitters makers. Also, a key opportunity missed is telling the story behind pink gin (Plymouth Gin and bitters); instead, it’s relegated to a short paragraph in the cocktail recipe section of the book.

A lot of the writing in Bitters feels bloggy. Parsons often relies on pop culture memes and anecdotal information to tell his story. He tends to name drop and comes off a little fanboyish, especially when talking about PDT in New York. Also, Parsons’ list of recommended spirits to stock a home bar is painfully bad and tips his hat as a fan or enthusiast more than anything else.

Ultimately, Brad Thomas Parsons’ book probably would have better been done as a blog than a book. The most valuable section of the book, how to make bitters, would make a nice blog, but what surrounds it is just too cursory and casual to make it work in book format.

Bitters: A Spirited History of A Classic Cure-All will be released on November 1, 2011. 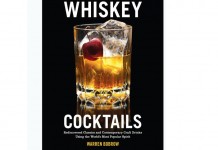