The amount of alcohol that flows through Las Vegas on any given day is almost unfathomable. Between drinks in the casino, bars, restaurants, and night clubs, Vegas probably does in one day what most cities do in an entire month. Much of this alcohol is delivered in the form of a top name brand vodka, over ice, with some soda water.

While vodka will probably be king for the foreseeable future in Las Vegas, a movement is afoot among a dedicated group of bartenders, mixologists and beverage program managers to bring quality cocktails to Las Vegas in a big way.

This movement is significant because it’s happening both on and off the strip. Downtown and in City Center, it’s poised to change the way that Las Vegas looks at drinks.

With that in mind we’ve picked our Top 5 Cocktails Bars in Las Vegas.

#1 Vesper Bar at The Cosmopolitan Hotel

One of the most significant cocktail bars in Las Vegas is Vesper Bar at the new Cosmopolitan Hotel. Beverage Director Andrew Pollard has put the craft cocktail front and center with our pick for the top cocktail bar in Las Vegas.

Vesper Bar is an oasis at The Cosmopolitan Hotel, away from the buzz of the casino, with a fair sized lounge as well as a nice large square bar with plenty of seats. The bar is very well staffed with exceptional mixologists who have a deep passion for spirits and cocktails. The drink menu begins with the signature James Bond inspired drink “The Vesper”, and then journeys through a mix of classic cocktails and modern standards. It’s one of the few bars in Vegas where the bartenders offered to improvise or make things special for us from off the menu.

The Vesper Bar combines fantastic ambiance with precision crafted cocktails, and a superb bar staff who are both great mixologists as well as great bartenders. Add to all that the sheer volume that they do at this bar and you realize that The Vesper is more than a fantastic bar, it’s a shining example of the future of craft cocktails, done with high quality in high volume.

#2 Savile Row at The Luxor Hotel

Savile Row is a unique fusion of speak easy and night club. This fusion results in vodka sodas being poured next to Green Chartreuse based cocktails. Bar Manager Ray Srp is Las Vegas cocktail royalty: he took over for Tony Abou-Ganim (probably the world’s best-known bartender) at the Petrusian Lounge at the Bellagio. Ray was set with the task of trying to follow in the footsteps of a giant and he managed to make it happen.

Here at Savile Row, he’s put together a cocktail menu that ranges from the sweet and easy to the more complex, and he does it all with ease. Great bars aren’t great without great bartenders, and Ray embodies the craft of hospitality that equals his phenomenal mixology skills. While it’s a little difficult to get into Savile Row, it’s well worth the effort. The vibe inside is dark, sexy and hip, and, combined with some of the best cocktails in town, it’s easily one of our top picks for the best cocktail bars in Vegas.

Downtown Cocktail Room is off the strip and a stones throw from the Fremont Street Experience, but once you walk through the doors, you enter another place and time. The Downtown Cocktail Room feels like a great secret with its intimate corners and small bar. There is no back bar “sea” of liquor bottles here, so as you sit down, your attention goes to the bartender rather than scanning the back bar for your favorite bottle of spirit.

While Downtown Cocktail Room has its roots in classic cocktails, it isn’t a classic cocktail bar. Mixologist Jeremy Merrit is an absolute savant when it comes to making cocktails and is constantly drawing inspiration from seasonal ingredients, new spirits, the bar’s vibe, and his customers. Downtown Cocktail Room has a unique rating scale for all their drinks to indicate how approachable they are. This is a great tool to help the casual drinker safely explore the world of cocktails while having an experience that matches their tastes.

Jeremy Merrit thrills in asking his customers to pick a few bottles from the lower back bar and then improvises a cocktail around them. While we were there we picked Averna Amaro, Woodford Reserve Bourbon and Los Nohales Mezcal. Jeremy added New Castle Ale, whipped cream and nutmeg, and turned it into an instant masterpiece. There’s a feeling in the Downtown Cocktail Room that something significant is happening behind the bar, and although it’s not on the strip, its influence will surely be felt there soon.

#4 Bar Moderno at The Aria Hotel

Bar Moderno at The Aria Hotel is located across the City Center from The Cosmopolitan and it shares some of the same commitments to fresh ingredients and craft cocktails with Vesper. Beverage Manager Mark Thomas has a distinctly unique view of cocktails and has crafted a beverage program with roots in the culinary world.

Heavily influenced by food, some of the drinks at Bar Moderna feel like meals, including the trio of Bloody Marys which each pull from progressively hotter peppers and are garnished by a trio of peppers. Classic cocktails get a spin with drinks like the Prickly Pear Pisco Sour, Caramelized Pineapple Side Car, and the Cucumber Collins.

These culinary classic updates are just the start, with internationally inspired libations in the works including drinks influenced by the cuisine of southeast Asia and India.

On the surface Bar Moderno doesn’t seem like it would be one of the top 5 bars in Las Vegas, but even a casual exploration through their cocktails makes it amazingly clear why something very special is going on here.

Herbs and Rye seems to revel in cultivating the mood of an old-time Las Vegas gangster bar. It’s the kind of bar you could imagine Bugsy Malone sitting at sipping at some whiskey. The deliciously dark and leathery bar has one of the deepest dedication to pure classic cocktails that we’ve seen. Bar Manager Neetaly Mendoza has put together a cocktail menu that is a journey through different ages of drinking (ie. Gothic Age of American Drinking, Golden Age, Old School Age, Prohibition and The Revival).

Although it’s not a speak easy, Herbs and Rye definitely captures the spirit of one and if you knock twice and speak softly you may or may not be able to sample some unique and hard-to-find spirits. There’s just something about how Herbs and Rye feels that sets it far apart from everything else, it’s easy to get lost inside this amazing bar, as time and space seem to slip away as you are enveloped by the soft leathery darkness of a fantastic cocktail bar.

A very special thanks to Tony Abou-Ganim (The Modern Mixologist) who was our virtual tour guide through the bars of Las Vegas. The fact that there is even a list of 5 great cocktail bars in Las Vegas is a direct result of the work Tony did at the Bellagio, which helped set all of this great cocktailing in motion!

Be sure to read more of our coverage of Bars in Las Vegas. 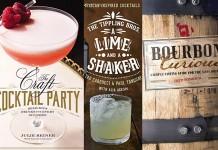 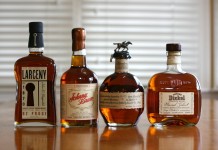